Abstract
After making a post in fall of 2021 on carp fishing statistics which generated quite a bit of interest on CCS, I did more digging on stats and reviewed the data generated to date. The article below is mostly a copy/paste of the first revision post/data/estimations, with some additional refinements made and sections added. I talked quite a bit with some folks in data science since the first post on carp fishing stats and brought their ideas into the analysis, which is reflected in the below.

Purpose
Determine the relationship between carp weight and percent likelihood of capture for fish in the range of 40-50 lb.

Too Long Didn’t Read (TLDR)
The math says you need to catch around 1000 fish to get one over 50 lb in Southern Ontario! Skip to the Discussion section if you’re tight on time.

[In 2021] I spent a lot of time on the bank thinking about how I can catch the biggest fish possible, like most of us do. After playing around (quite unsuccessfully) trying to target big fish using larger baits and fishing at big water venues, I started to develop the theory that carp fishing in Ontario is a game of statistics, where you simply need to catch as many fish as possible to wade through the average size carp in order to catch the giants. I theorized that statistics can be used to predict the percent likelihood of capture of the really big fish (and also the mirrors), and therefore tell you how many fish you need to catch in order to land something in the 30, 40, and even 50 lb range.

The data used to generate the plots in the below Results section is a sample size of 278 fish caught by the CornStars over the 2020 and 2021 season at a variety of venues in Bruce, Prince Edward, Wellington, Hamilton, and Northumberland counties. This sample size is not specific to a certain body of water, and represents an average Southern Ontario venue. All 278 fish were caught using “traditional” carp angling methods (rod pod, hair rig, carp rod/reel, prebaiting swims, fishing during May-September, corn or boilies as hookbait and method mix on the coil lead) for Ontario and carried out by intermediate skill level anglers.

Going into this experiment I had assumed that the fish weight would follow a Normal Distribution, which turned out only to be accurate for predicting fish weight within ~1.5 standard deviations from the mean. At the extremes of the distribution the estimated weights did not match well with my sample size, leading to the estimated percent likelihood of capture of the 30-50 lb range fish appearing to be unreasonable. The fact that the normal distribution did not represent the sample accurately could be due to a number of reasons like small sample size, skewed sample size (biased right hand), or the fact that the weight of carp caught simply does not follow this pattern. I also tried fitting the weights to a few polynomial functions but none of the trends seemed reasonable, even near the mean.

I fit a decreasing exponential function to the percent likelihood of capture for weights greater than the mean, and the function appeared to generate reasonable results within the sample size. It also generated believable numbers when extrapolated to up to the 50 lb range. In order to better test if the decreasing exponential function was the best model for extrapolating weights, the data set was divided into two (even and odd number captures).

Empirical data was used to interpolate percent likelihood of capture for mirror carp and carp with weights 20-35 lb. The empirical interpolations are based on the sample of 278 fish caught in 2020-2021 in Southern Ontario using traditional basic euro style tactics: 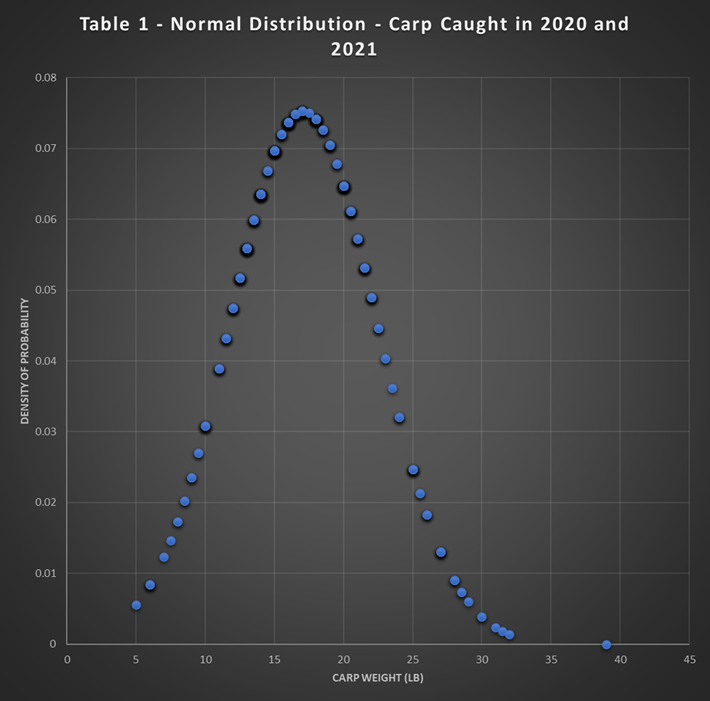 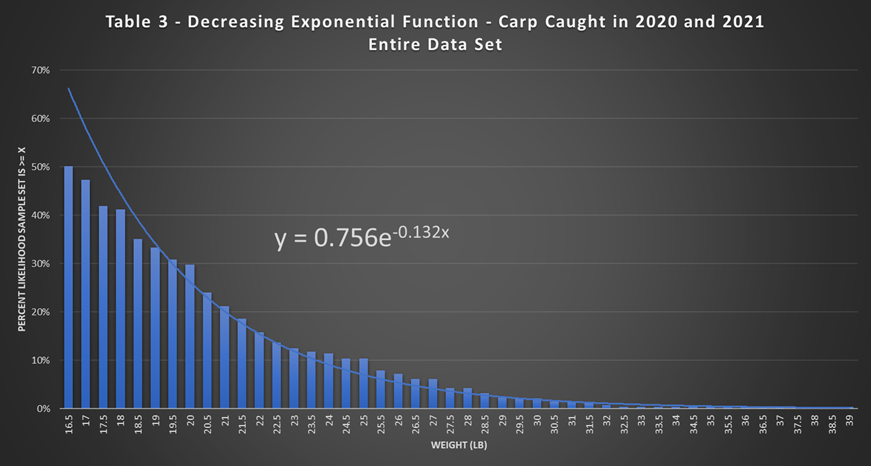 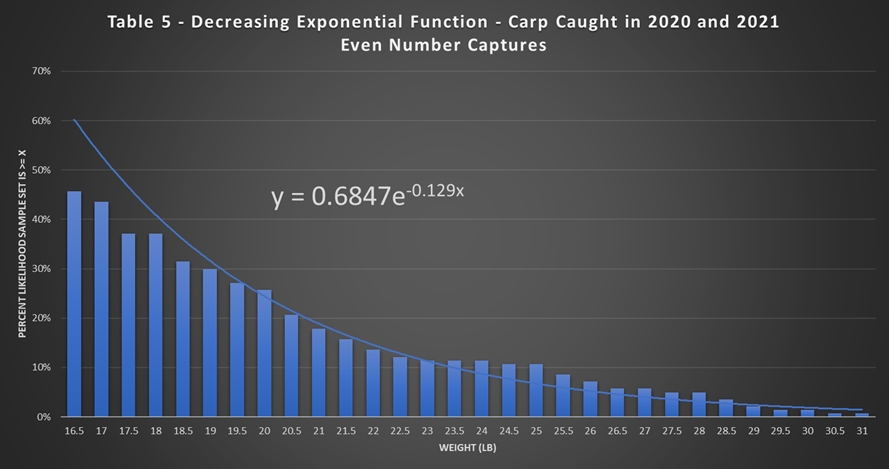 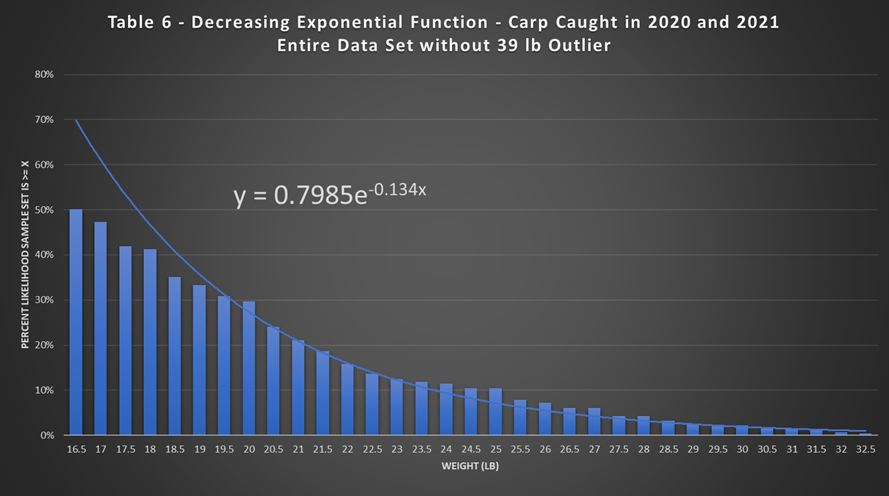 16 thoughts on “Article – Chasing The Fifty”